Back to Back: How I Studied Abroad Twice in the Same Summer 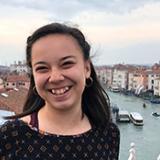 In the summer after her sophomore year at Duke, Tiffany de Guzman ('19) did two Duke-In summer programs: Duke in Bologna and Duke in Oxford. We asked her to share what motivated her to tackle four credits in one summer and what advice she has for others considering doing the same.

Tiffany (3rd from left) and friends outside of New College's dining hall, before the last high table

How did you decide to do two programs in the same summer?

I knew from the very first time I heard about Duke in Bologna that I wanted to participate in the program. I had fallen in love with the Italian language and knew that I wanted an opportunity to develop my Italian in Italy.

However, like many Duke students, I felt like I couldn't just apply to one program for the summer, I'd want to have a backup plan, so I started going through every summer study away program that GEO offers (I was clearly very eager). I began to narrow down the programs by how well they would fit my majors, whether I needed to know another language or not, and simply how interested I was in the program's location.

As my search went on, I quickly realized that there was nothing stopping me from applying to a program that I could do WITH Duke in Bologna if I got accepted into both. Instead of spending half of my summer sitting at home on my couch, I could rack up four credits that would all count towards my GPA in a 13-week period.

After coming to this realization, I had no difficulty choosing which Term 2 program to apply to—Duke in Oxford was the clear choice. The program aligned perfectly with my Political Science and International Comparative Studies majors, I would have a week between the two programs, and I would get to say that I studied at one of the most prestigious universities in the world.

Why Oxford? Did you consider others?

As I mentioned before, I technically considered every Term 2 program that I was eligible for, but as soon as I found out about the Oxford program, I knew that that was the program for me. Over winter break during my freshman year, one of my friends and I decided that we were going to take our first trip out of the country. This trip not only gave me the "travel bug," but also introduced me to the magnificence of Oxford's campus. When I stepped onto the cobblestone streets of Oxford, I was overcome by the same feeling that I've only ever felt one time before—the first time I visited Duke. To be surrounded by so much history, knowledge, and breathtaking architecture is nothing short of entrancing.

When I learned that Duke offered a program at Oxford, I almost couldn't believe that I could have the opportunity to study there. At first I thought the program meant taking a class with a Duke professor on Oxford's campus, but then I discovered I would actually get to work directly with tutors at Oxford. Not only could I study at Oxford, but I could experience the tutorial system that makes it so unique!

What would you say was the greatest takeaway from each program you did?

My greatest takeaway from Duke in Bologna is that being travel-savvy is a truly priceless asset. Before going to Italy, I had never planned a trip for myself or anyone else. Nevertheless, I secretly read through cheesy travel blogs at night and somehow convinced my friends that they should follow me across the country every weekend. Italy is one of the easiest and cheapest countries in the world to travel around—take advantage of it! It not only gave me skills I can use for the rest of my life, but also allowed me to truly immerse myself in the Italian culture. Italy wasn't unified until 1861, so cities that are only a few hours apart can feel like entirely different worlds. It's incredibly valuable to experience as much of it as possible.

My greatest takeaway from Duke in Oxford is that you can't allow yourself to get so swept up by the new world around you that you forget to look at the people standing by your side. I knew two people on our forty-six-person program when I came in and I can honestly say that in six weeks, I met dozens of the most amazing people I've ever known. It's so easy to be eager to make the most of your time and your money on a study away program (and that's completely okay), but you can't forget that one of the most valuable things you can take back to Duke with you is new relationships.

What's one thing you could only know after doing each of these programs?

Looking back at my time in Italy, I wish I could tell my pre-program-self to be less afraid of breaking away from the other students on the program. Duke in Bologna is a small program and you do everything together—you are going to leave with great memories and great friends. What's easy to miss, however, is the opportunity to build friendships with locals. It's especially easy to miss this opportunity when everyone is speaking another language, but pushing yourself out of your comfort zone is what leads to the most rewarding experiences. (Also, making foreign friends means you always have an excuse to travel again!)

The easiest thing to do in Oxford is stress over your readings and papers. The academics are rigorous and you should take them seriously, but you're going to regret it if you spend every waking moment holed up in your room or the library. Instead of getting frustrated by the library's limited summer hours (sorry, it's not open 24/7 like Perkins), take advantage of them! Work with your peers during the day to efficiently address your readings and papers, but explore Oxford during the evenings and weekends.

Once I officially enrolled in both programs, deciding what to do for the week in between was probably the hardest part. As someone who has consistently held at least one job for the past five years, I'm an extremely money-conscious college student. Therefore, I knew I wasn't going to fly all the way home and then all the way back to Europe between the programs.

Instead, I decided to solo-travel for a week and I can truly say that it was one of the most rewarding experiences of my entire life. I booked the perfect cheap-without-being-sketchy B&B in Salerno, Italy and spent the week doing everything from paddle-boarding off the coast of a small fishing village to doing a self-guided tour of Pompeii.

After my break was over, I must admit that I was a little sad to leave the sunny beaches of the Amalfi Coast for the rainy England skies. However, once I landed in London, I opened myself to having an equally rewarding experience, even if it was going to be the polar opposite from my time in Italy. I left a country where it's expected for you to be fifteen minutes late to everything for a country where being only five minutes early is considered late.

I convinced myself that this half of my summer wasn't in competition with the first half, but was rather complementary to it. The fresh enthusiasm of all of my peers in Oxford that had only left their homes a day or two before definitely helped me with this. I enjoyed my lack of jet lag while everyone else napped, and prepared myself for an amazing six weeks.

What advice do you have for students considering the back-to-back approach?

The only advice I have left to give would be to think of your back-to-back experience as being two incredible opportunities instead of a summer full of classes. To be honest, I didn't even realize that I had been going to school for eight months straight until I got back to Duke in the fall and someone else pointed it out to me. Two programs and thirteen weeks away doesn't feel like a grueling semester at all.

The best part of doing back-to-back programs is that halfway through your summer, you get to switch your country, your classes, your professors, and your peers. There's no risk of feeling drained because your enthusiasm immediately gets restored once you switch programs and get an entirely new cohort. When you're abroad for an extended period of time, it could be easy to forget how lucky you are to have this opportunity, but doing back-to-back summer programs is the gift that keeps on giving!

"To say the least, Duke's program did not disappoint and even exceeded my imagination in unfathomable ways."

"I realized how much I liked Italian culture on this trip, so I actually signed up for more Italian classes to fulfill an Italian major while I was studying in Bologna. Bologna is a decently tourist-free city, so I felt that I was really immersed in Italian culture."

"It sounds cliche, but being abroad is about opening yourself up to new experiences and living in the present moment. If the present moment has you sprinting through the Bologna Train Station to catch a last-minute train to Ferrara on a random Wednesday night, then you're doing something right."

Rounding Out The Econ Degree

Before I began my Italian studies at Duke, I might have (admittedly) been on the side of the liberal arts education debate that was confused why so many general education requirements were necessary for graduation. If I knew what I wanted to do, why would I need to take so many classes in other disciplines? But Duke in Bologna pushed me into the realm of “hopeless romantic” for the liberal arts education.

A Typical Day Attending the Oldest University in Europe

Our classes were held in an architecturally and historically rich building that was once part of a monastery, then a penitentiary, until it was finally adopted into the fold of the oldest university in Europe, the University of Bologna.