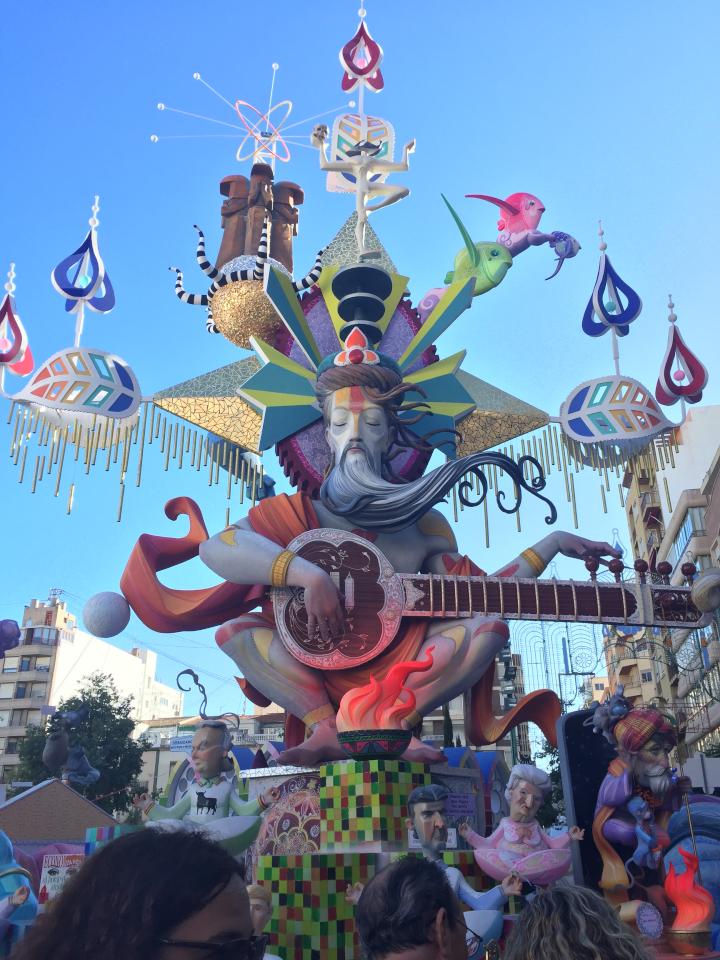 How incredible is this statue made entirely of paper and wood? During our last week in Alicante, these gigantic hogueras (Spanish for “bonfires”) appeared in the streets almost overnight, blocking major roadways and decorating the city.

For an entire week, the Festival of San Juan dominated Alicante with music from 10 a.m. to 4 a.m. and ear-shattering fireworks every day.

After a tense competition, in which this particular hoguera won the best overall prize, firemen proceed to systematically ignite each hoguera. From statue to statue, the entire city rushes to watch beautiful sculptures turn to mute ashes.

I’ve never before seen or heard of such a festival, but participating in the excitement revealed to me the degree by which I had adopted the culture through the immersive Duke in Alicante program.

My experience demonstrates that, in order to truly understand a culture, you must commit yourself completely, becoming part of that which may baffle you.

Thank you, Duke, for encouraging me to forsake my ignorance and providing me with this unbelievable opportunity to do so!

"Creative writing, on the spot, in my second language, presented to strangers- home definitely felt 4,000 miles away."

Learning from the Boruca

"An experience that I will never forget was our three-day trip to an indigenous community called Boruca: a simple, yet beautiful place that is home to 2,000 people."

"I look forward to continuing talking with my Spanish speaking family and friends on campus. Traveling throughout Europe was a blast and has led me to consider traveling again next summer."

"Upon arrival, the entire group centered to the top of the castle, but after this, it became a practice that spurred reflection and friendship (and a little exercise after demasiado paella)."

"The highlight of my experience in Costa Rica was the quality of the time I spent learning with my classmates and professor. Going on a study abroad in a small group really allows you to learn in depth and in unison."

Duke in Alicante: My First Experience Traveling and Studying Abroad

This was my first time outside of the United States, and my love for this study-abroad experience has sparked my interest in spending a semester abroad in Madrid."

Immersion in Action in Alicante

"The people of Alicante commission dozens of enormous art pieces on street corners throughout the city, and at midnight on Saint John’s Eve, the statues are set on fire."

"I began to challenge the portrayal of Latin America in the American media. I watched Costa Rican news, which provided an accurate depiction of Costa Rican citizens and their concerns."

Kristel on Pioneering Duke in Cuba: A Risk Worth Taking

"By the end of the program, a very non-musical pre-med student was enthralled by the history of Cuba and the controversy and richness of Salsa.”

"I observed the daily telephone conversations between my host mom and her daughters; the locals walking and holding hands; the students at the University of Alicante offering to hang out despite their exams."

"My favorite part of this experience was really all of it. I especially loved the daily excitement and the constant learning and exploring. I loved living in Alicante, a small, compact city on the Mediterranean. I loved living with my host mom, a feisty, energetic woman who cared for me deeply despite the language barrier."

“Prior to the Duke in Spain program, I didn't have a lot of experience reading or writing in academic Spanish. The program allowed me to improve these areas through literary, historical and artistic angles."

"As I look back on my experience in Alicante, I hope to continue learning Spanish at Duke so that I can apply my language learning skills both in volunteering and a career in medicine."

What Happened in Madrid...Prepared Marissa for a Lifetime

“I was surprised by the rigor of my program, which really helped me rapidly improve my Spanish. I essentially took Spanish 204 – a semester-long course offered at Duke – in two months."

Jason Finds Alicante a 'Gem of All Cities'

"One memory from this program that will always stick with me is when my host mom complimented me on how much my Spanish had developed. I can still remember how nervous I was walking into her small apartment, stuttering between every word of Spanish I thought I knew."

Katherine on Duke in Madrid: A Family Away From Home

“To be honest, I did not miss the U.S. at all – perhaps in part because there was an election going on – kidding! But really, I did not miss it. I could message or Skype with my friends/family if I needed to, and I think I wrote over 100 postcards while away."

Before going to Costa Rica, I was a perfectionist. I never wanted to make a single mistake while I spoke. During the program, it didn’t feel like I was making much progress. For weeks, I’d stumble over what I was trying to say. I didn’t notice a change until my last night...the fear that had been constantly holding me back from making mistakes was gone.

The Professor Made All the Difference

I decided to participate in Duke in Costa Rica due to raving reviews from previous students on the program. They talked about how incredibly immersive the program was and how much fun they had. I was looking for a unique way to spend my summer and this program was the perfect opportunity.

Amazing Connections and Friendships in Just One Month

The great thing about this program is that you get a full overview of the way the public health system works in a different country. You don’t have to be super into global health—there is a breadth of study and opportunity on the program. And you will still have plenty of time for activities with your host family and to explore Costa Rica!

The Pura Vida lifestyle is best summed up as the combination of the many daily experiences that Tico has. The experiences I’ve had taught me that in order to fully immerse yourself in and understand a culture, you have to keep an open mind, be flexible, and completely embrace it. In other words, you have to challenge yourself to try new things.